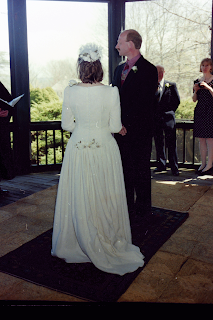 As a fearless beginning weaver, I designed & wove the fabric for my wedding dress.  My husband's Aunt Ingrid designed & sewed it.  My dress made the centerfold of Weaver's Magazine ("Lace Wedding Dress" Issue #21: pp31,33)  in 1993.

It all started in early 1990 when I realized I had always wanted to learn how to weave and had never been able to figure out where & how to start.  I did not even know what a harness or a heddle was, but it made sense that it would be easier to figure these things out (including how to weave) if I owned a loom.  My father was a big believer that one could avoid a lot of implementation problems by using the highest quality tools.  I bought a 4 harness modular 40" Folding Dobby Loom from AVL and followed the AVL weaving instructions precisely.  Within a couple of months I had upgraded my AVL to a 16 harness dobby.  Because it was a spectacular loom & I followed instructions carefully I never had any technical problems.  My tension was even & selvages smooth.  The books I bought from AVL (e.g., Handbook of Weaves by Eleanor Best) helped me learn how to draft.  I did, however, have a lot to learn.  My early weaving featured flimsy place mats & stiff napkins.  The color choices that worked so well in needlepoint & machine knitting rendered woven fabric that looked like a muddy mess (2 different hues with the same color value).
Posted by Nancy's Fiber Blog at 2:12 PM No comments: 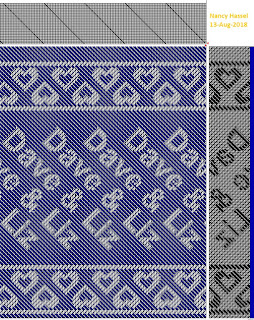 This is the draft for a towel that will be a September wedding gift.  The warp is 5/2 natural Mercerized Egyptian Combed Cotton from RM Yarns sett 20 EPI.  The weft will be blue 5/2 mercerized cotton from Webs at 20 PPI.


My husband & I worked & lived for many years on Aquidneck Island in Rhode Island. We started retirement planning as our kids finished college. We bought a "handyman special" on 50 acres of forest land in Hillsboro, New Hampshire. By the time we retired in January, 2018, the house had heat and running water, fewer holes in the walls, and there were no longer saplings growing right up to the house.

Prior to retirement, we also set up my "dream loom" in a pretty room on the top floor. I retired to weave on a 40-shaft AVL. My 60" 16-shaft AVL is still in RI waiting to move to NH.